Punk Feminist Cults of Personality, Part 2: Knocking them down

So last week I wrote about how we need to be careful with our feminist punk heroines. I wrote about how we we have to listen to each other, be respectful, and be constructive about keeping our egos and our heroine-worship in check. This week, it's time to turn the knife counterclockwise, and talk about heroine bashing -- or, if you want a not that clever play on words, heroine abuse.

If there's any single person in the punk feminist universe whose persona has grown to mythic proportions, it's Kathleen Hanna. She clearly isn't comfortable with being singled out or treated as Riot Grrrl's sole originator, ideologue, and/or spokesperson, but it doesn't change the fact that Bikini Kill and Le Tigre have been influential, and it doesn't change the fact that Kathleen is a public figure, and that love her or hate her, people tend to pay attention when she speaks. Kathleen Hanna, back in her Bikini Kill days

I'm going to admit that I fall on the 'love her' side of the debate. And I didn't even know that there was a strong and seemingly pretty righteous 'hate her' faction, within the queer activist community, until I read a particularly nasty comment war attached to an article about Kathleen donating her papers to NYU. The central issue of debate in the comments? Kathleen's credibility as a feminist in the wake of her support of the Michigan Womyn's Music Festival.

For those who don't know: the Michigan Womyn's Music Festival (MWMF) is just what it sounds like: an outdoor concert festival for womyn, no boys allowed. The concert organizers adhere to a strict and unfortunately named 'womyn-born-womyn' policy, meaning that transsexual and transgender individuals are prohibited from attending. The idea behind the festival is to create a safe space for the womyn in attendance, and the claim is that biologically male bodies might negate the 'safety' of the setting.

The more I think about this policy, the more I dislike it. I think it reflects a complete misunderstanding of trans issues and quite possibly of gender in general. I think it makes the organizers and the MWMF seem horribly transphobic, and I agree with those who have protested and boycotted this. But I just can't get on board with this idea that Kathleen Hanna is a transphobe, too, because she performed at this event.

I'm more than willing to admit that I'm biased here, and that part of my struggle with this has to do with the fact that I've been listening to this woman since I was 17. Her work has been a huge part of my adolescence, and I've never done anything but look up to her. 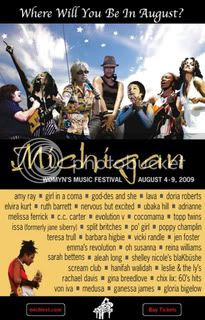 MWMF poster. I'll keep my snarky comments about it to myself.

But there's more to it than that. As an adult, feminist, and student, I'm not convinced that Kathleen Hanna is a transphobe because I simply haven't seen the evidence. Every time I read about what a transphobe she is, the only example of her apparent transphobia is her involvement with the MWMF. There are no quotes about gender or about trans-issues from Kathleen, no excerpts from personal essays or her zines or anything like that. I'm guessing that these quotes exist, but I have yet to see them. And I refuse to tar and feather a person based on a guess that something exists.

I also refuse to label any individual a transphobe for performing at the MWMF if I don't know the entire story of that person's involvement with the event. The organization itself seems questionable, if not utterly bigoted. But I don't know Kathleen's thoughts on the policy or the festival. I don't know why she and Le Tigre chose to perform, and I'm guessing that most of the people judging Kathleen for this don't know the whole story either. Again, I feel as though there must be information out there, that I haven't been able to find, about Kathleen's position on the festival and its trans-excluding policy. Again, I find it impossible to make a decision based on information I haven't looked at myself.

Whether Kathleen is a transphobe or not, I find the treatment of her alleged reputation really disturbing. I find it appalling and frankly offensive as a writer that people are parroting the same story about the MWMF, seemingly without too many facts, and passing it off as either journalism or good blogging. (Here's a hint: it's neither.)

Even worse, it's another example of media tearing down another female public figure. This is an example of institutionalized sexism, a woman-hating bias so deeply ingrained that even female and feminist writers buy into it. (I'm no exception, as anyone who's ever heard me rant about Patti Smith or Chrissie Hynde knows.) Kathleen is unfairly targeted because of her sex as well as her involvement with feminism. You don't see this happening to people like Ian MacKaye or Eddie Vedder. You never would have seen it happen with anyone like Kurt Cobain, or Joe Strummer, or Joey Ramone.

Tearing women down like this feeds into this myth that such public figures, especially feminist leaders, are supposed to be perfect. Guess what -- they aren't. Is transphobia acceptable? No, of course it isn't. But the fact of the matter is that even the most evolved of us feminists have issues and prejudices. Every single one of us is the product of a kyriarchal system. Most of us have some sort of privilege or another, and all of us have some kind of power, that we may or may not exercise effectively.

And no matter how smart or aware or sensitive we are, we're all eventually going to say something stupid. All of your feminist leaders, your punk rock heroines, your favorite radically fierce female artists, are going to fuck up at some point. So prepare yourself.

But not for disappointment. Yes, someday, somewhere, someone you admire might say something that offends you and it might be disappointing or even hurtful -- but that's not what you need to be prepared for. What we, as feminist artists and leaders in our own lives and circles need to prepare for, is how to deal with and learn from these situations.

I think, before we can do anything else, we need to know ourselves, and we need to know what we can tolerate. A voice of reason emerged in that comment war I mentioned earlier, and it said that we have to decide, as individuals, what flaws we can stand in our heroines. Would it bother me if Kathleen Hanna were a transphobe? Yes, it would. But it wouldn't keep me from listening to Bikini Kill, and it wouldn't invalidate her feminist ideas or the impact they've had on me.

But it's not going to be that way for everyone, and we need to learn to live with that. Once we know our own perspective, we have to learn how to be respectful of others'. Does it bum me out that some people detest Kathleen Hanna for her involvement with a single festival? Yeah, it really does. But it's also completely legitimate, and I have to accept that some people don't consider her a model feminist leader.

Ultimately, what we need to learn is that we're all human. The leaders we look up to, the friends and fellow activists we admire, the coming generations for whom we hope to pave the way: we're all human, and we're all imperfect. For that reason, we all deserve both respect and a little slack. Because if we can't treat our leaders that way, well, no one else will, either. And it's time for that to stop.

p.s. For more on MWMF, try Crabigail Adams (a former zinester whose zine I totally used to read, how weird is that?) and/or Pam's House Blend, a generally awesome site.

I think KH introduced a lot of females who were teens or in college during the mid-ninties to feminism, and made them aware that gender rights was still important even in the blase nineties (when females really had no prominent strong female role models to look up to).
I can only imagine that people who weren't impacted by her are the ones saying these things--either younger or older women.
While I question her support of an exclusive music festival--I believe in equal rights, not special rights--to suggest it's her whole belief system is ridiculous.

"To suggest it's her whole belief system is ridiculous" -- well said, Maggie!

Thanks so much for getting it. I was afraid my point might not be so clear and that I would just end up upsetting people or hurting feelings.

Thanks for this post, I completely agree. To dismiss someone's life work because they were involved in one admittedly dodgy festival is just stupid.

It's possible that Hanna just didn't know much about the trans movement in the past, many feminists didn't and still don't. Being a feminist is a huge learning curve. You may make mistakes and you won't know everything as soon as you claim the title 'feminist'.

I think she is now a supporter of the trans movement, not saying she wasn't before, as she mentioned them on her interview at grit tv.

I remember her mentioning trans-issues in the grit tv interview as well. Even if she doesn't understand everything about it, it seems like she's making an effort, and isn't that what counts? I think it takes guts to be criticized for something, and accept that criticism and try and learn from it. It seems that that's what she's doing. And THAT is what I want in my feminist leaders.

This work is licensed under a Creative Commons Attribution-Noncommercial-No Derivative Works 3.0 Unported License.